In its 4th edition, the 2016 RLB Crane Index® identified a total of 1,714 cranes across Abu Dhabi, Dubai and Doha, highlighting a 12% increase in number since December 2015.

With tighter and more conservative budgets, governments are notably being cautious about materialising new projects, however the long term vision for a self-reliant diverse economy and solid partnerships strongly persists. The 2016 RLB Crane Index® highlights the progress on some of the major projects launched

in the past year such as the Doha Rail programme, the Dubai South and Dubai Creek Harbour as well as the development of Al Mussafah industrial area and Reem Island in Abu Dhabi.

The overall top sectors in our major cities are the residential, civil and commercial sectors, however we are seeing the highest increase in 2016 government spending in the infrastructure, hospitality and retail sectors where governments are clearly focusing on ensuring proper social and economic development to strengthen and increase governmental income from non-oil industries.

The 2016 RLB Crane Index® rise is noticeable in the skies across the three cities. While Abu Dhabi continues to work on substantial projects related to the industrial sector, Dubai is still expanding its suburbs to offer more affordable and spacious housing to its residents, and Doha is focusing on strengthening its infrastructure and implementing a new railway system to increase the city’s efficiency and optimise its economic growth.

With the current economic and political challenges faced in the Middle East, the United Arab Emirates and Qatar are facing a pressing need to deliver mega projects on time for the Expo 2020 and the FIFA World Cup 2022 which has left them contemplating new possibilities and partnerships that are key to addressing efficiency and capacity issues. The 2016 crane count is a testament that both countries are sustaining a robust construction market while continuously exploring innovative ways to enable strong social and economic development. 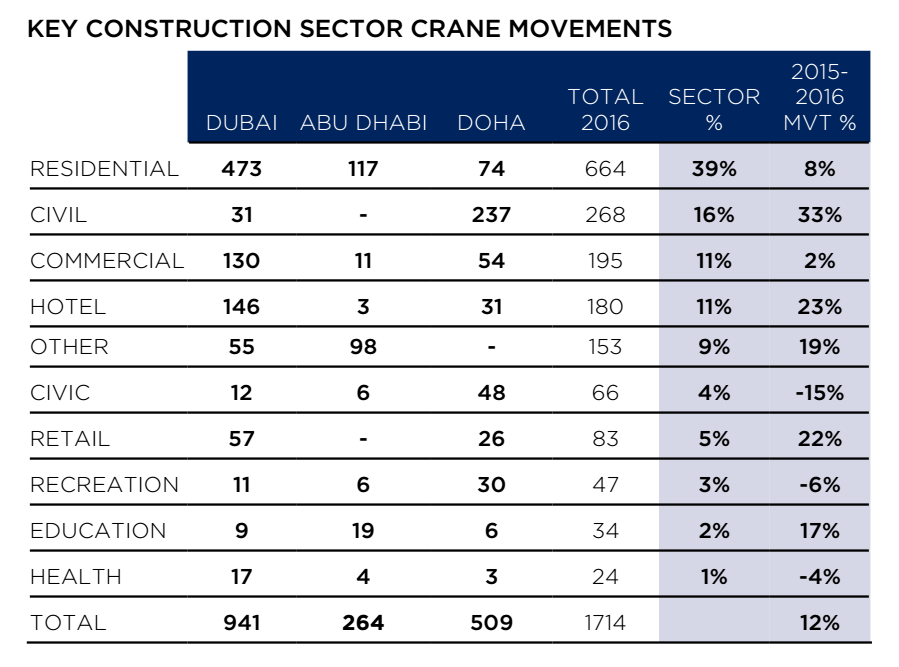 Based on the 2016 RLB Crane Index®, the residential and hospitality sectors are still leading Dubai’s construction market with 473 and 146 cranes respectively. While

the residential projects are scattered throughout the city’s skyline, more than half of the hotels crane count are associated with Business Bay and Palm Jumeirah developments.

The commercial sector shows an increase of 46% since the December 2015 crane count bringing up the number of cranes to 130 with new office buildings being constructed in Dubai Silicon Oasis, Jumeirah Lake Towers and Business Bay. As Dubai gets ready for the Expo 2020 and continues to strengthen its core sectors, such as services and tourism, retail projects continue booming, with examples such as Nakheel’s major mall developments on the Palm Jumeirah and on Deira Island.

The 2016 RLB Crane Index® highlights the top 5 most dense areas in Dubai with ongoing construction as Business Bay, Palm Jumeirah, Jumeirah Village Circle, Dubai Silicon Oasis and Downtown Dubai. The necessity for Dubai to expand its income sources calls for a variety of projects encouraging innovation, creativity and successful businesses and touristic attractions.

As highlighted by the 2016 RLB Crane Index®, the residential and industrial sectors remain the most dominant ones in Abu Dhabi’s skyline representing together over 80% of the total number of cranes. It is clear however that one of the highest increases since the last count is in the education sector with 19 cranes spread between Shakboot City and Mohamed Bin Zayed City.

With Abu Dhabi’s aim to ensure economic sustainability and build a secure and confident society, the capital

is placing strong focus on areas such as education, health, and social and economic development although its current market is the most exposed to the fall in oil prices.

in order not to hinder on-going activities and future economic growth. This is noticeable with a slight increase of 6% since the last crane count.

In preparation for the World Cup 2022, the city of Doha has recorded over 500 cranes in its skyline, despite the fall in oil prices which has impacted most of the GCC.

The Qatari government with its revised budget and prioritized projects, maintains a robust year in 2016.

The RLB Crane Index® report has shown how critical the civil sector is for Doha’s economic development, on a global and national level. The city’s infrastructure and transportation networks have boosted the crane count by 30% since the last count in December 2015. With 237 cranes, the crane count related to the civil sector is nearly half the number of cranes present throughout Doha.

Activities around the Qatar National Museum and Msheireb Downtown Doha are moving forward, resulting in the crane count in most of the remaining construction sectors decreasing. However, the 2016 RLB Crane Index® recorded a 5% increase in the total crane count. 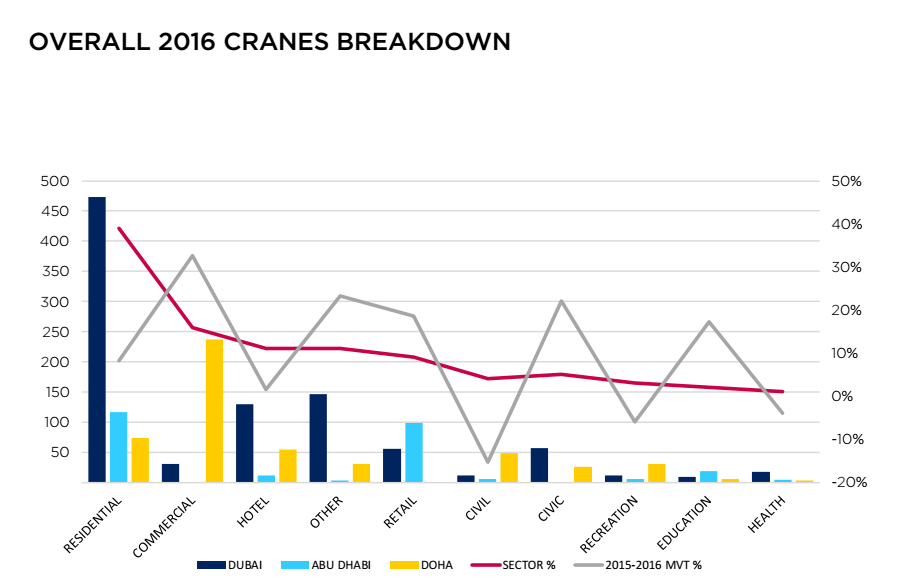